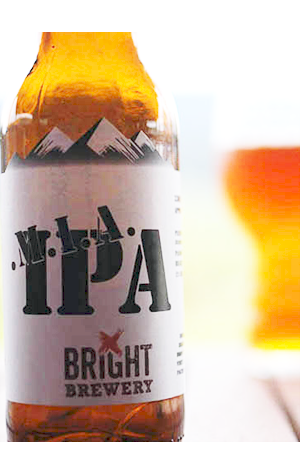 The M.I.A. IPA was the first beer to notify those paying attention that, in Jon Seltin, Bright Brewery had unearthed a young brewer of great potential. A few years on, the potential realised, Jon is off to soon-to-be-revealed pastures new and has taken the exact specifics of the M.I.A. recipe with him but the new incumbent of the head brewer role at Bright, former Southern Bay and BrewDog man Ryan Tyack, has set about giving the beer a new (and not too dissimilar) lease on life. And given he played a lead role in the design of Southern Bay's fine Hop Bazooka IPA he's well placed to do so.

While we're yet to get our lips around the new IPA, we're told by the brewery's peeps that it remains: "A celebration of fruity, tropical, floral hops, with a nicely balanced bitterness and a malt structure that does just what it needs to let the hops sing" – hops they say offer up "aromas and flavours of mango, passionfruit and lychee".

Available in bottles and on tap at Bright Brewery