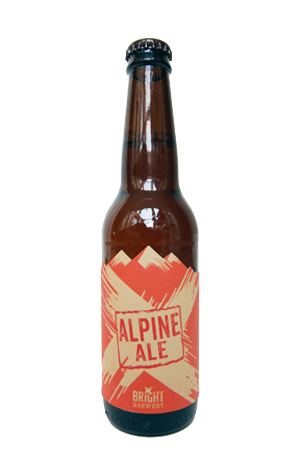 New head brewer at Bright Brewery, Ryan Tyack, is wasting little time putting his own stamp on things. He's created his own take on the brewery's popular M.I.A. IPA (posted elsewhere on this site) and has also created this, a new Australian Pale Ale that the brewery's marketing manager and resident beer writer / beer geek James Davidson is calling as "exactly what the brewery has been needing to satisfy old and new beer lovers alike."

Apparently, the name "Alpine Ale" is one long bandied about on the banks of the Ovens as one with potential for embellishing the Bright core range and, while it is still being tweaked, that's what can be expected later in the year. For now, this first batch pours a "hazy golden with a creamy head, smooth palate, fresh tropical hop aroma and flavour with zing." The Galaxy-hopped beer is designed to fill the gap between the brewery's Lager and Blowhard Pale, a punchier US-inspired take on the pale ale.

UPDATE (07/08/15): The Alpine Ale, still a hazy golden blend of citrus and stone fruit hops and sweet pale malts, is now part of the permanent range and available in bottles too.