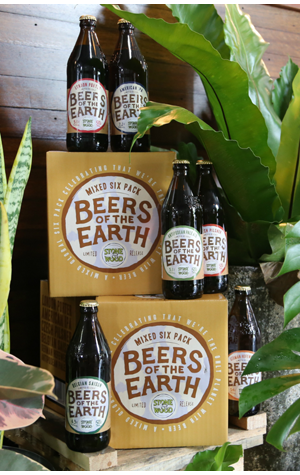 What is it they say about great minds thinking alike? In the same month, two of the country's biggest, most successful and fastest-growing breweries have released mixed six-packs and, not only that, the concepts behind them are eerily similar. As we've posted elsewhere on the site, Sydney's 4 Pines has released the Bastard Children of the British Empire, their attempt to tell the story of the evolution of pale ale from its first appearances in the UK through the US, New Zealand, Australia and Belgium. And, at the same time, Stone & Wood has released Beers of the Earth, a tour of some of the world's classic beer styles via six beers.

The number six made sense as that is the number of tanks now left at their home brewery in Byron Bay, with the remainder having made the short trip up the road to the bigger production facility at Murwillumbah. And the six beer styles chosen are about as classic as you could wish for.

London Porter – 5.1% & 25 IBU – a relatively light-bodied dark beer featuring chocolate and light roasted characters, a touch of dark fruits and a drying bitterness.
Czech Pilsner – 5.0% & 40 IBU – a golden-coloured pilsner that looks like the classic Pilsner Urquell with full, slightly sweet malt flavours and a spicy, herbal bitterness.
German Hefeweizen – 5.4% & 12 IBU – a rich, sweetly malty take on the Bavarian wheat beer style that's big on the banana characters often found in such beers.
American IPA – 8.2% & 75 IBU – one of the biggest, if not the biggest, beer ever produced commercially by Stone & Wood, this layers on the big citrus and pine hops with enough specialty malts to keep them and their resinous bitterness in hand.
Belgian Saison – 6.8% & 36 IBU – probably our pick of the bunch (just like the Belgian Pale was from 4 Pines; noticing a pattern here...), this is a lean and dry beer with lovely fruity, spicy and herbaceous aromas and flavours.
Antipodean Pale Ale – 5.1% & 42 IBU – Pacific Ale and Cloud Catcher have shown these guys and girls know how to make such beers, with this another beer awash with tropical aromas plus a surprisingly biting bitterness.

Feel free to let us know your favourites below!