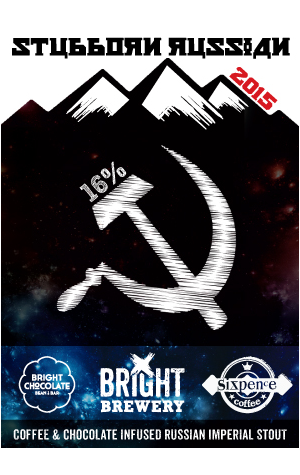 Bright's annual winter release, Stubborn Russian, has been an evolving beast since its first appearance four years ago. Former brewer Jon Seltin liked to tweak the recipe each year and even released a small batch of one vintage that was aged in whisky barrels, rising to 13.5 percent ABV.

That beer looks a little like a session Russian Imperial Stout compared to this year's as new brewer Ryan Tyack continues to put his stamp on things in the Victorian High Country. Given he spent much of his formative brewing years at BrewDog where one of the beers he brewed was the Scots' 18.2 percent ABV imperial stout, perhaps it's not that surprising that in this case he's done so by aiming high, so high in fact he's tagged the beer a tribute to Yuri Gagarin, Russia's first man in space.

He's also brought in some friends from Bright, with Dominican Republic 70% Cacao Single Origin chocolate from Bright Chocolate and coffee from local roaster Sixpence Coffee added to the mix in what has ended up as a 16 percent beast – comfortably one of the biggest commercial brews ever released in Australia. And while it would be remiss of us to claim that it hides its 16 percent completely – it is undeniably a big beer that you'll probably want to share with a friend – it achieves its target without any off-putting high alcohol nasties. It also manages to showcase its collaborators' input too, with both rich, sticky chocolate and aromas of freshly roasting coffee prominent. There's some intense dark fruit there too (and "roast meat with caramelised skin" according to one friend who sampled it!) from a beer so viscous it leaves your glass a gleaming caramel colour long after it's drained. As Bright's marketing manager suggests, it's a beer with which to well and truly get your nerd on...

Draught and bottles from Bright Brewery and direct from them online