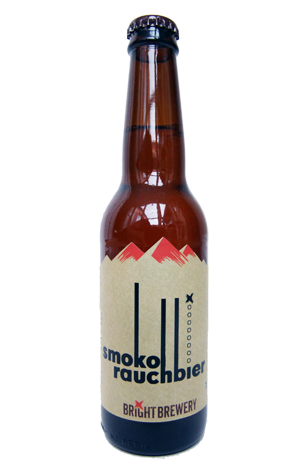 You don't see too many smoke beers around Australia, despite their unique charms and suitability for pairing with such a wide range of foods. As the success of 3 Ravens Dark at the 2015 Perth Royal Beer Show shows, done well they can excite even the toughest critic's palate too. Whether Bright's decision to brew one was sparked by a love of the classics originating in Bamberg, Germany, or the fact there's a small town nearby called Smoko we don't know. What we do know is that Smoko is the beer that's excited the Crafty palate more than any other current head brewer Ryan Tyack has conceived since moving there from BrewDog.

It features four different smoked malts – Beechwood, Cherrywood, Mesquite and peated – and, while its smokiness hits you with some force, it's a far cry from the insanity of, say, Yeastie Boys' 100 percent peated malt Rex Attitude. There's a sweetness and fruitiness to both aroma and flavour – alternately smoky, woody and cured meaty – and enough balance to ensure it's never overbearing. They reckon it's a great beer to have with blue cheese, steak or pork belly; our experience with well made rauchbiers suggests it'll probably go with pretty much any cheese or meat you want to throw at it too.