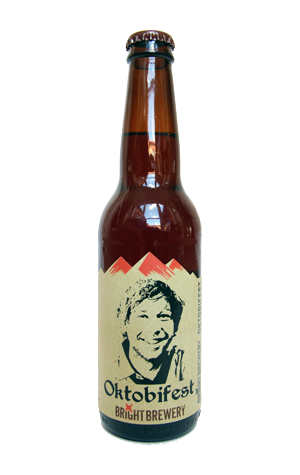 As welcomes to a new job in a new brewery in a new country go, this is one of the best. German brewer Tobi Dankert responded to an ad for a new brewer at Bright in the Victorian High Country that he'd spotted on The Crafty Pint, was signed up and moved to the Alpine town a few weeks ago. He was invited to brew a beer and opted for a style that was both timely and offered a nod to his home country. In return, the brewery not only named the beer after him but put his smiling face on the label too.

Oktobifest is timely as it's out in time for Oktoberfest and offers a nod to Germany as it's inspired by the Vienna lager style beers traditionally brewed for said festival (yes, we know Vienna is in Austria). Not only that, it uses the classic lager yeast strain from Weihenstephan. There are no quirky New World tweaks, just a straight interpretation of the style: German Hallertau hops give the beer soft floral, spicy aromas and the gentlest of bitter finishes, while specialty malts lend the beer its amber colour and biscuity sweetness.

On tap at the brewery and via their online store