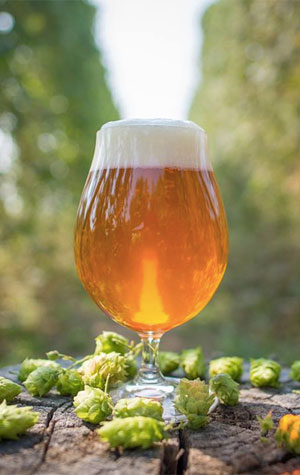 Would it surprise you in the slightest to learn that Akasha’s latest limited release is an IPA? If so, it really shouldn’t; they don’t brew real ale. Sours are out. They’re not into witbiers – though they once brewed a stout. These guys do hoppy beers and only hoppy beers. Fortunately, they tend to do them rather well.

That was certainly the case with the first two beers in the Single Hop series, a line of limited release IPAs that uses the same 7.2 percent ABV base beer (also, incidentally, the one they use for the Hopsmith IPA) but throws a different punchy American hop at it and lets it shine on its own. The first in the series used Mosaic, the second used Simcoe and this third edition is built on Centennial.

It’s described as giving “a citrus and floral character to both the aroma and palate”, which seems a reasonable, if concise, description of what you might expect if you were given no description at all beyond the beer’s name. If the previous beers in the series are any indication – and the nature of the experiment suggests it should be – whatever character does come through will come though in a big way but will still be packaged tidily within that finely balanced malt bill.

If you’ve so far enjoyed what Akasha’s Single Hop series has offered, you’ll be pleased to know that there’s a fourth iteration due imminently. Though you’ll probably be less pleased to know it’ll be the last in the series. What hop will they go out with? Well, let’s just say it’s not going to be Fuggles.