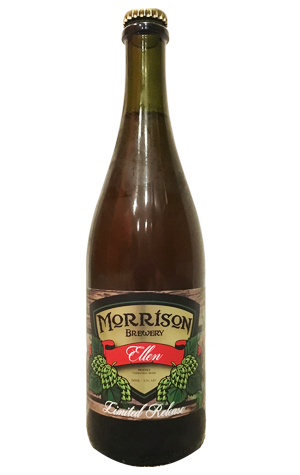 As reasons go for creating a new limited release beer, welcoming a new baby into the world is up there. It's a policy that Paul and Melissa Morrison embarked upon when they had their first child, Angus, and one they've stuck to since. Given it's a family run enterprise that goes beyond just Paul and Melissa, they're creating beers for both the siblings and cousins that have followed Angus (he was a massive barrel aged Scotch Ale, if you're wondering).

The latest arrival in the "Junior Brewer" series belongs to Paul's sister, with her daughter Ellen being celebrated with a pomegranate Berliner Weisse. Says Paul: "All the other ‘Junior Brewer’ series have been big, bold, barrel aged beers so this time around we went for something lighter and brighter."

The pomegranates have been added in great enough volume to give the beer a peachy-pinky colour and some soft, berry like aromas. The fruitiness is joined by a palate tickling acidity, with the souring bacteria lending the beer a dry and dusty finish that contrasts with the lively upfront fruits.