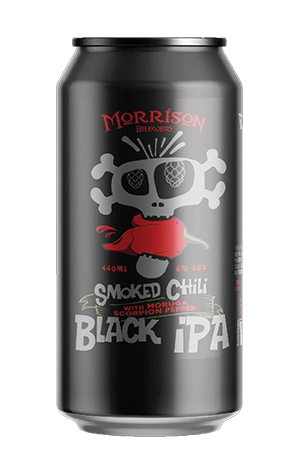 Writing from a purely personal position, Smoked Chilli Black IPA is certainly a fortunate release from Morrison Brewery. Having spent a lot of 2020 getting really into growing chillies and making hot sauce, one of the many varieties I bought and planted from seed was the Moruga Scorpion, but sadly the hot sauce I’d planned never came to be. It wasn't for lack of trying either as those seeds never sprouted, despite trialling many means of planting them, which makes me doubt they ever had much life to begin with.

So enter Morrison’s dark IPA, which contains exactly the chilli I wanted to taste; while I can't make that hot sauce, I can at least know how it goes in a beer. It's an impressively balanced beer too, where a mix of tropical hop flavours combine with the chilli flavour so that mango and pineapple are built into the heat. The chilli is apparent from the first sip, then slowly builds over time and, with the roasted dark malts, there's a smoke flavour akin to Rauchbier, on top of which chocolate ties everything together with a savoury finish.

If only those chillies ever grew I'd now know to use them in a mole and serve in tacos with fresh fruit. What a sad state of affairs.