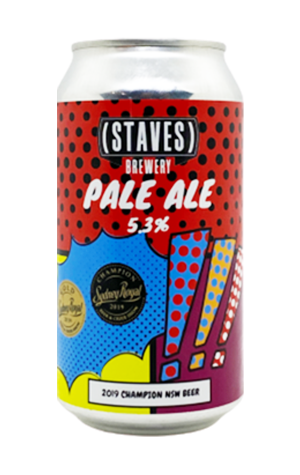 Bam!!! Kapow!!! This tinnie makes you want to wear your underwear on the outside and kick bad guys out of windows. (But then, a lot of things make me do that.)

If the bright colours and exclamation marks on the label of Staves Brewery’s Pale Ale doesn’t make you feel like a comic book superhero, the beer inside might. Like moving from one panel to the next, this pale shifts from a fruity aroma to a piney taste to an earthy aftertaste, punctuated with a karate chop of bitterness.

It took home the Champion NSW Beer at the 2019 Sydney Royal Beer & Cider Show, so if that’s not enough of an origin story for you, I don’t know what is.