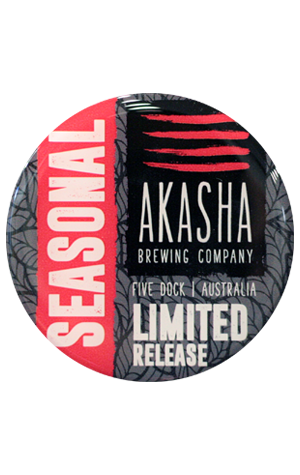 It’s long been customary, when winter arrives, for breweries to release a dark beer of some kind. There’s just something about all those extra malt characters – the richness, the sweetness and the roast – that serve as comfort to the cold when you sip away at them nice and slow. But malt has never really been what Akasha is about. They use plenty of malt, of course – and are as fussy as any brewer about the kinds they use – but their beers are ultimately designed to put hops on a pedestal. So when it came to brewing a dark beer, why try and change what’s in your DNA?

So it is that Akasha’s winter offering is an American style stout characterised by, you guessed it, hops. They’ve opted for a couple of their favoured varieties, Cascade and Centennial, and their pronounced characters come through everywhere from aroma through to bitterness. And yet you wouldn't say this is an especially robust beer. The dark malts do combine with the hops to add a different kind of depth in comparison to the rest of the lighter coloured beers of the Akasha range, but the flavours still feel tight and punchy as opposed to rounded – although the addition of oats does add some of the customary creaminess. As such, this is the kind of stout you're likely to find yourself knocking back quickly and reaching for another glass, rather than trying to earn your reward through slow sipping.