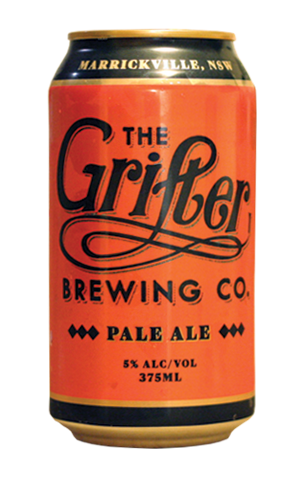 It’s been five years since the Grifter Brewing Company arrived on the Sydney scene with a beer they called Edward. Back then it was an unfiltered and fairly unassuming, yet unmistakably punchy, Australian pale ale. And, for a beer that had no publicity surrounding it other than word of mouth, it was almost unbelievably popular; the first keg that went on tap was drained within two hours.

It became their flagship beer and, for a long while, their only year round release, which even then was a bit sporadic as they juggled growing demand with the gypsy brewer’s perennial problem of having limited tank space in which to make beer. As time wore on, the beer was colloquially adopted by drinkers as “Grifter pale”, then officially as the brewers dropped Edward from the tap badge. By the time they opened their own brewery in Marrickville, it had firmly cemented itself as their most popular beer, and by some margin. So when they began packaging the odd limited release in cans they also began fielding incessant questions about when Grifter pale would be given the tinnie treatment. The answer is: now.

The beer that launched the legend now comes ready to travel for the first time, fully wrapped in its resplendent orange with throwback black font, a piece of design that’s as striking on the shelf as it seems nostalgic and familiar in the mind. Its all very clever really: like the great beer brands of the world, when you see it there’ll be absolutely no confusion as to who makes it and what’s inside. On that, regular drinkers will know the taste well. It's still fairly light, it’s still got the big hop punch, it’s still unfiltered and it’s still a heck of a good beer to drink. Just as it’s always been.