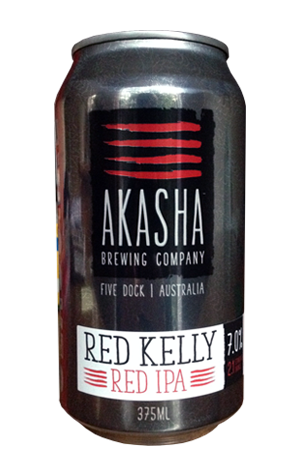 Having first appeared earlier in the year as a one-off small batch release created on their pilot system, Akasha’s Red Kelly has now been picked for promotion to full scale production. It’s the first red IPA they’ve done on any sort of scale and, by the bottom of a glass, you’re left wondering what took them so long.

The aroma is immediately inviting, fuelled by the big American hops which are there in an abundance of citrus and sumptuous tropical fruit characters. But, unlike a regular IPA where the hops are front, centre and standing to attention, it’s almost as if this style of beer has allowed them to just relax and spread out. For that we can thank the malt. They used a couple of Gladfield varieties – Redback and Shepherd’s Delight – which gives the body some extra bulk but also, crucially, gives a rounded caramel sweetness that underpins the whole beer, transforming it from a straight up hop bomb to something altogether richer, more supple and way too easy to enjoy for a seven percent ABV beer.