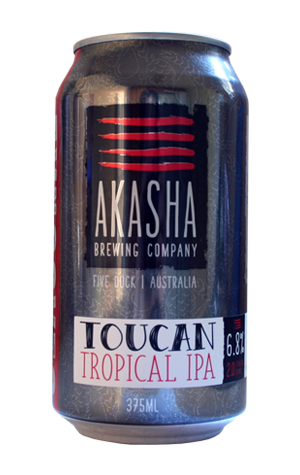 Toucan Tropical IPA is the latest limited release from the hopsmiths at Akasha and it’s hard to recall them having made one that’s so darn user friendly.

The general idea behind it was to make something that looked like a classic American IPA and had the requisite high hop fruitiness, but with an atypically low bitterness. And you’d be hard pressed to argue they didn’t nail the brief with a beer that’s a delightful melange of tropical and stone fruits, a supple salad mix that seems to have taken in everything on the spectrum from passionfruit to citrus.

Because they managed to keep that bitterness so low (certainly in a relative IPA sense), the fruity feeling has little to hold it back and that makes it light, bright and and simply pleasurable to drink. At 6.8 percent ABV, it pulls no punches but, if you weren’t warned, you’d bet your finest plumed headdress it wasn’t as strong as it is. Super fruity and super sessionable, you’re likely to find that one can of Toucan won’t be enough.