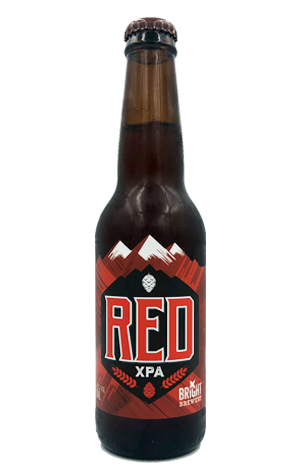 The thought process when sampling this new limited release from Bright went something along the lines of...

"What does the Xtra mean here? It can't be pale as the beer is red (well, a rusty, deep amber). Maybe it's booze as, at 6.5 percent ABV, it's certainly packing a punch. But then isn't that taking it out of XPA territory? Maybe it's extra hoppy as, despite weighing in at red IPA strength, it drinks far lighter in terms of palate weight than many such beers, allowing the hops to shine: citrusy and candy like atop lively caramel flavours, as opposed to the berries 'n' treacle combo of many RIPAs."

And then I looked at the label (something I prefer to do post-making notes to create some element of blind tasting to the process) and the answer was there: it's a showcase for Red X specialty malt from Germany's Bestmalz. So not "Xtra" at all.

Mystery solved, where would it sit style wise? Well, it drinks like a sessionable red IPA, making it kinda XPA like in terms of drinkability. It's also clean, well balanced – Xtra delicious, maybe? – and a sign they did well to land brewer Reid Stratton from New England.