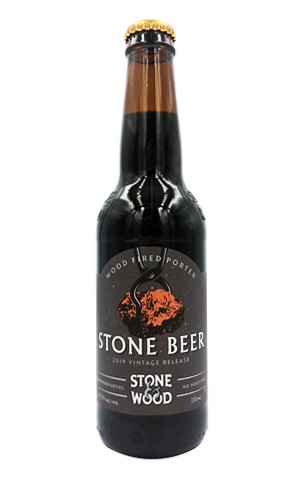 For many people whose good beer awakenings were rooted in the early 2010s, Stone & Wood's Stone Beer would have been their first introduction to a true seasonal. As we approach the 2020s, in an age of beers brewed with bodily yeasts and fried chicken or inside amphorae and taxidermy roadkill, using mere red hot volcanic rocks certainly seems passé. And compared to their most recent Counter Culture release, a sticky mango IPA, a wood-fired porter in 2019 feels positively wholesome.

You probably all know the story by now but, in early May every year, Stone & Wood get a gaggle of lovely people together at the brewery in Byron Bay to help brew that year’s Stone Beer. Generally, this involves watching other people haul bags of malt while you sink schooners of Cloud Catcher around a fire. It just so happens that this fire will be a brief home to some bloody great rocks which, once hot enough, will be lowered into the brew kettle. In theory, this will caramelise a portion of the wort which will, along with some dark specialty malts, produce some nice unfermentable sugars to add complexity and depth to the finished beer.

Similar to last year’s release, Stone & Wood have again added a small percentage of cherrywood smoked malt into the grist. This is not a smoked porter by any stretch, but the subtle smokiness as the beer warms is an absolute boon. This is an inky black, full-bodied porter with tobacco, coffee and cocoa notes combined with a raisin sweetness and assertive bitterness. This is a beer that opens up considerably as it warms and will probably get better with age.

Lucky for you, Stone & Wood squirreled away a bunch of the very similar 2018 Stone Beer in port and whiskey barrels and are releasing this barrel-aged version on tap at selected venues and in vintage crocks online.

Find yours from June 10 via Stone & Wood's beer finder