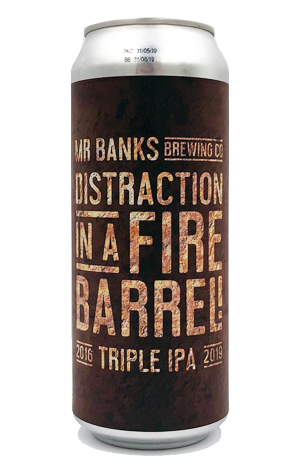 Aside from running one of the most inviting brewery venues in Victoria and being delightful people, the thing the Mr Banks crew have become known for more than anything else is their love of IPAs. And, while they've brewed all manner of them, they have a particular penchant for hazy ones. Their Wheeze The Haze is one of the best NEIPAs around and, to mark turning three, they took that concept and, well, turned it up to three.

With a name that's another reference to Chris Farmer's beloved Mighty Ducks, what you have here is a 10 percent ABV hazy IPA that's been triple dry-hopped with what they're calling an "insane amount" of Idaho 7 and Simcoe.

It looks like breakfast juice, smells of mangoes with a side of pineapple, and the bitterness has been kept low to allow its juiciness to take control. They've slapped a tight, three month best before on it too to ensure it's consumed fresh. Given the size of the cans and the hefty alcohol content within, it's probably an idea to share each tinnie too – not just because it's massive, but to maximise each tinnie's freshness and keep the booze from impinging on your hopfest. You can always share your mate's straight after anyway.