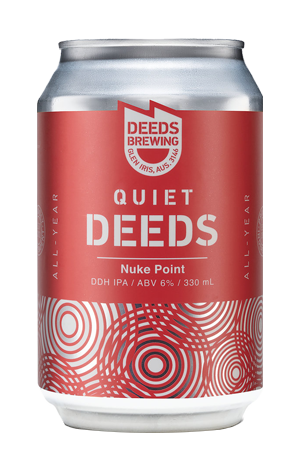 Nuke Point is a beer that says the Deeds team are backing their brewers to the hilt. A highly dry-hopped IPA – 12g of hops per litre for the trainspotters out there – it comes with a 30 day best before date. Well, actually, it's a little more than a best before: their intention is to reclaim any that isn't sold within 30 days of packaging and "nuke" it.

It's a fun way of highlighting the importance of freshness in such beers – and one likely to cause them a fair bit of self-created logistical hassle should any not sell in a month – but one greater numbers of brewers are making in colourful ways. The beer inside the cans has evolved fast since its first release, with more US hops added and the NZ hop influenced softened a little. The result (at least at time of writing) is an IPA with stewed, thick tropical aromas, shot through with a touch of that leaner Kiwi character. There's a little sticky sweetness, plenty of haze and an oily bitterness that plants it well into IPA territory too.