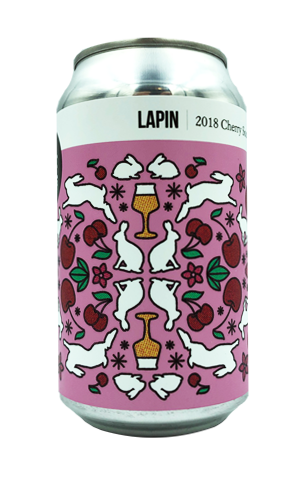 The Site Fermentation Project is Hop Nation's funkier side, a place where you're as likely to find wine in a can as a mixed fermentation sour. Given the brewery is launching a festival – Blobfish – dedicated to wild, sour and funky beers, one assumes we'll see ever greater focus trained on this side of the business over time too.

Lapin, while meaning rabbit in French and coming with such creatures adorning the labels, is instead a celebration of the 2018 cherry harvest, with some of the brewery's foedre-aged sour blonde refermented on organic Lapin cherries sourced within Victoria. And, boy, can you tell...

Pouring a hazy, deep crimson, there's a dense cloud of sour cherry awaiting you in a manner that's equal parts French table red and sour lolly. Accompanying the fruit in what's a relatively full-bodied affair (it is 6 percent ABV, after all), is a sharp, vinous acidity and a hint of barn-like funk too, the sort of characteristics that might have your mind drifting north from the dinner tables of France and over the border into Belgium.