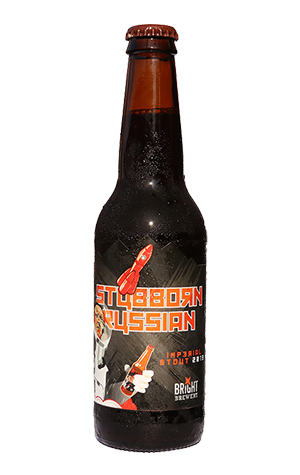 Bright Brewery's Stubborn Russian series of imperial stouts has been appearing each winter since 2011 and each iteration often brings a different ABV and a new mix of adjuncts. This year the bottle’s taken on a new look too; gone are the hammer and sickle seen in previous years and in their place is another image that loomed over the Cold War: the space race.

This year's release is the first to come out under the watch of Bright's new head brewer Reid Stratton and, at 12 percent ABV, it sits just a fraction below last year's and has done away with the cocoa addition from Bright Chocolate too. That’s not to say there's no chocolate flavour - there's a lot, which comes served with coffee, dried dark fruits and some spice, all bringing to mind chocolate cake served with maraschino cherries. There’s a hint of vanilla in there too but that’s soon swept away by a roasted, bitter finish.