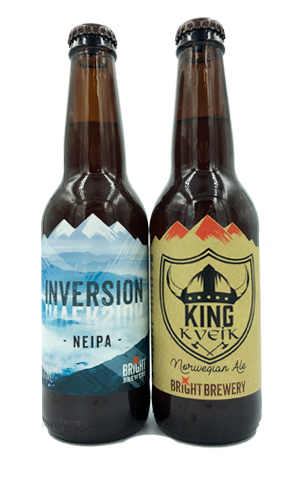 Head brewer Reid Stratton continues to make his mark at Bright Brewery as the new releases come not only thick and fast but from diverse regions of the beer world. In the case of Inversion, it's a NEIPA inspired by the brewery's region of the world in winter, with an icy mountainscape coated in clouds on the label. The clouds are repeated in the glass, which pours a little darker than most NEIPAs doing the rounds and with a little more sweetness too. It's a sweetness that helps accentuate the hop character, one that takes in berries and overripe tropical / juicy fruits. There's a decent bite to the hops too, a little like the winter wind sweeping through the High Country at this time of year.

As for the King Kveik Norwegian Ale, it's another beer featuring super-yeast kviek but placing it in a different environ to the vast majority that have come our way. For the most part, they've been IPAs of one form or another; here, while the label talks of "vibrant orange and juicy citrus flavours", I found it more in line with their other descriptors. It's earthier, darker, herbal and feels more like a traditional ale from the northern reaches of Europe. There's plums and dark spice / perfume on the nose, dry, toasted malts and a broad bitterness, all setting it apart from the local kveik crowd.