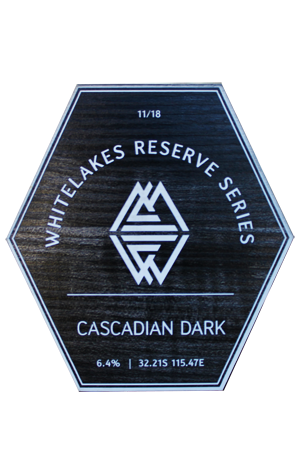 One of brewer Sean Symons oldest friends in the beer world is Doug Donelan, who these days heads up NZ Hops and, thus, could be viewed as a friend with benefits. Or, in this case, one with handy tips. Sean had gained early access via Hopco to experimental hop variety HORT4337 from the 2018/19 New Zealand harvest and wasn't happy with what it was doing in this beer. Doug assured him to hold on and everything would be OK.

And he did and ended up with this Cascadian Dark (another name for beers of the black IPA ilk), with the hop variety – said to offer up pineapple, passionfruit, peach and grapefruit – set against a dark malt base, while piney licks provide contrast as proceedings close creamy and bitter.

As of mid 2019, it was the most creative offering pouring at Whitelakes, with Cascadian Dark showing plenty of promise for the brewery’s tap lineup, one that's set to expand and allow for greater experimentation over time.