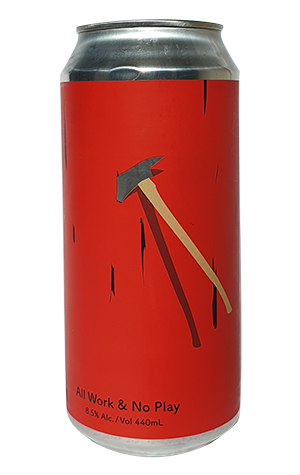 Back when Justin Corbitt was a wide-eyed brewer getting his start in the beer industry at Hawkers, one set of steady hands (attached to rather tall body were) showing him the ropes belonged to Dan Hall. Today, both brew out of different breweries, with Dan the Tallboy at Tallboy & Moose and Justin steering the ship at Deeds Brewing.

To relive their days spent together, the two teamed up for All Work & No Play, a DDH Hazy IIPA with a downright mad level of dry-hopping: 40 grams per litre. Other than referencing Stephen King’s greatest work (and Stanley Kubrick’s second best movie), the beer’s name alludes to the long, sweaty hours brewers put in to keep the beer flowing during summer.

Pouring a golden haze, aroma wise the beer is like roving your way through a pine forest, with the dry hop combo of Amarillo, Vic Secret, and Simcoe also adding a mix of orange, pineapple and stone fruit flavours. There’s a bit of bitterness in there but mostly it’s a soft and smooth ride, helped along by the addition lactose, that's a little like slowing losing yourself in the snow.