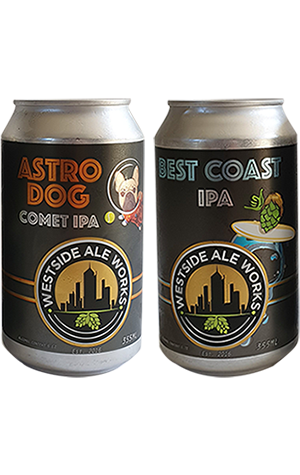 Living up to the brewery’s name, Westside Ale Works’ Casey Wagner has recently been exploring some big and bold IPAs. Best Coast IPA is an ever-changing beer: each time it’s brewed, he picks a different mix of hops from Australia, New Zealand and America. The can we got our hands on had a big upfront hit of citrus, stonefruit and pine that was followed by a big, bitter whack at the finish.

Astro Dog is an IPA brewed with Comet hops, a variety that’s been around since the 1960s but hasn't become a household name like many of its Stateside siblings. Historically, it’s often been used as a bittering hop for lagers but more recently brewers have focused on Comet’s aromatic qualities for pale ales and IPAs. In Astro Dog, it’s mostly ruby red grapefruit and a light spice that come to the fore in a hazy and only gently bitter beer.