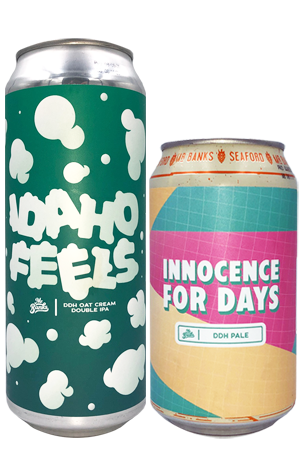 There's plenty to be said for finding something you love and spending time doing it over and over again, not just for personal satisfaction but because the end result is only likely to get better and more consistent. And this duo from Mr Banks could be presented as exhibits A and B.

If you've been following the brewery over the past couple of years, you know the drill by now: a stream of hazy, pale golden beers laden with hefty grams per litreage of characterful hops. In the case of Idaho Feels – the second in the Feels series of oat cream double IPAs – there's just the one variety at play: Idaho 7, which seemed destined to be the top dog out of the USA after Mosaic until Strata started flexing its muscles. It reminds me a little of Australian Enigma in its ability to conjure a spectrum of characters and, while Mr Banks talk of this beer as pineapple punch, there's more to it than that.

It pours like a dense peach juice (with a head, obvs) in which the juiciness and bite of the hops override the lactose – at least initially – ensuring this is no overtly sweet treat. Aromas take in lemon citrus, Kiwi sauv blanc and, continuing the trans-Tasman theme, there's something reminiscent of a slice of Pav. Sweet and vibrantly hoppy to taste with enough grip to the bitterness to dry the finish in the face of the combo of warming booze and fattening elements (oats and lactose) that add a little fruit curd character on the palate as it warms.

Innocence From Days is another gift to the country's avid hopheads. Like Blackman's just-released Needs More Citra (albeit with Mosaic and Simcoe at play here) it really is hops for days: opening in tropical fruit territory, ending in a pine forest, and with some textural prickle and a little resinous grip on the side palate for company as you make your one from one to the other.