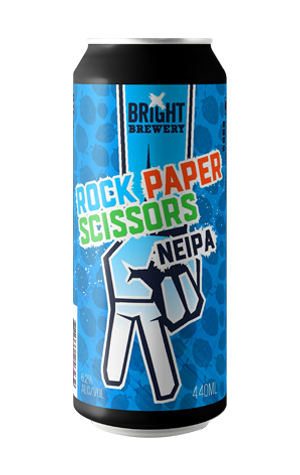 It's come to something when it's not enough to release multiple new beers every month and you feel the need to give the same beer three different labels... I'm not sure I fully understand the reason, other than Rock Paper Scissors is a three-piece game; maybe you're supposed to challenge your mates with a can hidden behind your back and the winner gets to drink them both?

What I do understand is it's another NEIPA / hazy IPA from head brewer Reid Stratton, this time featuring newly launched hop variety Lotus (plus Amarillo, Mosaic and Galaxy), which apparently can be traced back to a Japanese hop from the 1930s. It's been utilised in a beer that's definitely NEIPA rather than mere hazy – it's like someone has dropped in flour or chalk to give it a weighty density. Pineapple, soft stone fruit and a little mango appear first, although it's worth allowing it to warm as vibrant citrusy characters join as it does, albeit softened by a creamy coconut / vanilla vibe. Velvety in texture and low in bitterness, it does what you expect from such a beer.

NB Mixed cases featuring Off The Wagon Wheel and Rock Paper Scissors are up for grabs for Crafty Cabal members with the ballot drawn on August 19.