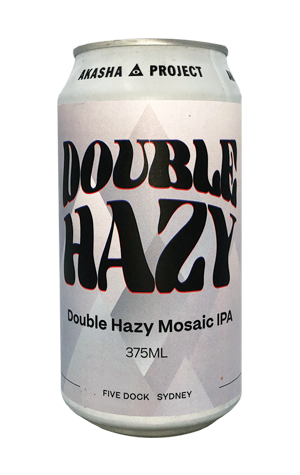 When Akasha let loose their rebrand at the start of spring 2020, they also took the opportunity to adjust their core lineup, tweak a few old favourites and introduce a couple of brand new beers. In what is surely a sign of the times, consumer purchasing behaviour and, ultimately, founder Dave Padden’s love of hops, they settled on a core range that's essentially five different hoppy pale ales. And you could argue the first beer in their Akasha Projects series fits under that broad categorisation too.

The biggest new arrival in their new look cans is the Double Hazy Mosaic IPA. Earlier in 2020, Dave told us Mosaic was his absolute favourite hop so it’s not entirely a surprise Akasha Projects would start with a beer that’s positively oozing with Mosaic compounds.

Just cracking the can leads to an all-out Mosaic assault. It’s a straight up fruit salad of ripe mango, peach and honeydew wafting all over the shop. There is just the slightest hint of the dank, earthy, sweaty note that almost always presents in Mosaic beers for me (it’s not a bad thing, I promise). The mouth is soft and sherbety but there’s no shortage of bitterness.

Despite the hazy moniker and appearance, the Double Hazy is much closer to the double IPAs of yore. There’s no under-attenuated lactose-laden, sweet ‘n’ juicy bullshit here. This is a big, big IPA from a brewery at the top of their game and long may it be ever thus.