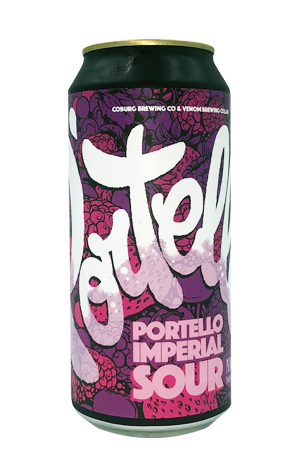 When I first visited District Bottle Store, opened in Pascoe Vale by the families behind Venom Beer and Coburg Brewing Co, Joel Drysdale – founder of the former – brought my attention to an imperial fruit sour from Sydney's One Drop, claiming it had blown him away and was the sort of beer he love to brew. (I bought a can; it was indeed marvellous.)

Roll on a few months to October 2020 and here comes an imperial fruit(ish) sour from Joel and his partners-in-booze (who are counting down the days 'til they can reopen their Post Office Hotel complete with nanobrewery home for Coburg). I say "fruit(ish)" as it's inspired by the grape and berry drink Portello. Now, I have to admit that, even 12.5 years into my second Aussie odyssey, I'd never tried it, leading their rep Mik to drop a bottle off with the beers for comparison. So compare I will.

Portello (beer) lacks the intensity of Portello (soft drink)'s deep purple colour and cordial like sickliness – the latter does comes with 66g of sugar per serve, after all – and instead has the deep pink hue of a hazy framboise. Yet, for all that there’s a whiff of lacto-derived sourness on the nose of P(b) there’s plenty – and I mean plenty – of lolly like fruity sweetness there too. When people think of dessert beers, it’s typically a milkshake IPA or some form of adjunct-laden dark beer but this is very much for the sweet-toothed too.

The end game is something that's arguably more liquified boiled lolly than boozy P(sd), with that sweetness smothering anything in the way of souring acidity.

tl;dr It's a GABS festival beer to sate those bemoaning the absence of the 2020 events.