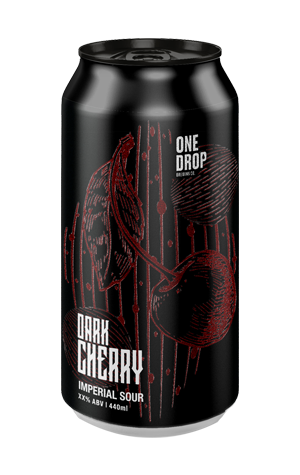 It’s only April and already 2020 has thrown a whole lot at things at us we all rather it hadn’t, thank you very much. But in the pursuit of endless optimism, I’m going to suggest something I'm grateful for in 2020 - the rise of imperial sours. This isn’t the first time I've waxed lyrical about them, and I hope it won't be the last.

The latest one to cross my path is One Drop’s Dark Cherry Imperial Sour, and I found myself raving about it to everyone who would listen (in lockdown, this included my wife, my next door neighbour from a distance of several metres, and a fruit bowl). From the moment you pour it blood red into the glass and gaze at the deep pink froth on top, you know One Drop fruited the hell out of this kettle sour, as they are wont to do. The glorious hue is the result of them adding a ridiculous 219 grams of dark and sour cherries per litre of beer during the fermentation, and then leaving the concoction to rest on the cherry skins for four weeks.

But the colour is just the beginning. The perfume rising from this elixir blends the sophistication of cherry brandy with the whimsy of cherry Fanta. In the mouth, the flood of fruit is rich and rounded, thick and therapeutic, sweet and sour, hitting every part of your palate at once. The fruit flavour is so all-consuming that you find yourself wondering if a whole cherry has plopped into your glass. There’s a full mouth tartness, but no vinegar or harsh bite; the sourness is the gustatorial equivalent of a back scratch that sends pleasing shivers through your body. And of course, the spreading warmth in your chest only magnifies this feeling.

As I've said before about well-made imperial sours - the balance of flavours is what makes them such a joy to drink. And in the case of One Drop’s Dark Cherry Imperial Sour, its balance rivals that of a man riding a twelve-foot unicycle. Which isn’t as easy as it looks.