Beer One Drop Slow It Down & Cali Bud 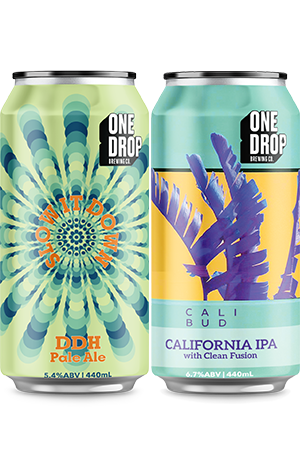 Among the never-ending parade of pastry beers and IPAs with at least three Ds in their name, One Drop seem to have accurately predicted the longest period of decent weather Sydney has experienced in about two years with a couple of absolute banging beers practically made for schooeys in the sunshine.

Incredibly, Slow It Down is their first DDH pale ale. Not only are they debuting the style on their roster, it’s being used to showcase one of the stars of NZ Hops’ Bract program, the as yet formally unnamed NZH102. It was only three weeks ago that I was hoping to get my hands on a beer single hopped with NZH102 so this cracking pale is a double blessing!

Right out of the gate I could tell I was going to enjoy this one: the aroma was a mix of lemon/lime, white grapes, ripe apricot and red nectarines. On the palate is more of the same but with the addition of a touch of hop resin overlaid on the juicy tropical fruit. The malt base includes spelt and oats and it’s superb. Smooth and clean with a balanced bitterness that makes for a thoroughly quaffable and expertly-honed pale ale.

Accompanying Slow It Down is a release with just over an extra percentage point in ABV that's no less dangerously drinkable. *Cali Bud is a lean, mean California IPA brewed exclusively on a foundation of pilsner malt and hopped with a mix of predominantly modern varieties in Sultana, BRU-1, Cryo Citra and Lemondrop. Basically, what we have here is a heavily hopped West Coast IPA with a razor thin malt base. Sounds pretty bloody good, no?

I get a boatload of citrus out of this combination, with the first whiff reminding me of a refreshing limoncello with hints of mandarin and lychee. Although the bitterness is relatively light compared to a more traditional Westy, there’s practically zero residual sugars from the pilsner malt which allows the resinous pine needles to play a starring role.

One of my favourite feelings in the world is coming back from a swim in the ocean and sitting on a deck with an ice cold schooner knowing that you have time for a few more. Cali Bud is almost the personification of that feeling.