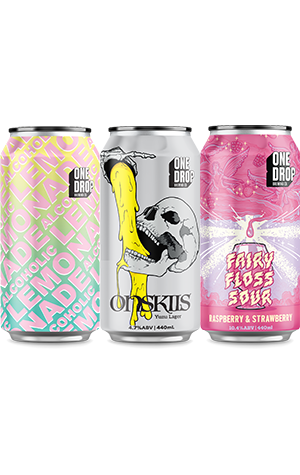 With their last spring releases for 2022, One Drop are doing their utmost to usher in a Sydney summer that’s brighter than the last one. I’m neither a professional brewer, nor a meteorologist, so I can’t say for certain that brewing fun, summery beers is likely to have a significant impact on rainfall predictions and cloud cover, but it couldn’t hurt, right? Right?!

What can you say about a beer called Alcoholic Lemonade that isn’t immediately obvious just by hearing the name? One Drop are claiming this is a beer but I’m not convinced this isn’t just a vodka and lemon squash that’s been labelled as a beer to avoid the alcopop tax. It smells, looks and tastes almost exactly the same as the sadly discontinued Schweppes Traditional Lemonade but the difference is in the balance of sweet and sour. Unlike a lemon squash, this is intensely sour with practically no sweetness to speak of, which means it’s refreshing, delicious and shockingly easy to drink.

The second beer also has citrus as the drawcard, except a different species showcased within a much more nuanced style. Onskiis is lager brewed with rice in the grist, NZ hops and yuzu juice. Yuzu is a small yellow citrus fruit, closely related to mandarin and most often associated with Japanese cuisine, but it was actually first cultivated in central China and introduced to Japan about 1200 years ago.

Yuzu has a very distinct flavour that’s like a mix of mandarin and grapefruit and has been used in alcohol for centuries. After the sour lemon assault of the lemonade, Onskiis feels like you’ve moved on to something a bit fancier that you break out once the kids are in bed. The yuzu comes through in a big way with the bright and fresh citrus character dominating both the nose and palate of the otherwise lightweight lager base. The bitterness, while mild, presents more like what you get from citrus rinds than from hops with a crisp, clean lager finish.

If Onskiis is something you bring out once the kids are in bed, then this Fairy Floss Sour probably signals that the evening has a taken a chaotic turn to the point that the children are being dragged out of bed and forced to perform under threat of violence. Has anyone checked on the brewers at One Drop recently? Are they OK? There’s no contagious brain disease going round or anything? Who of sound mind takes a 10.4 percent ABV imperial sour, plops in a load of raspberry and strawberry fruit purée and then pours in box after box of flavoured flossing sugar?

This thing is virulent shade of pink and smells like a red creaming soda ice cream spider. I get raspberry jam, vanilla, generic candy flavour and if I’m honest, the type of artificial strawberry flavouring that I really enjoy. It actually falls into this weird zone of being neither especially acidic or sweet, it just… is.