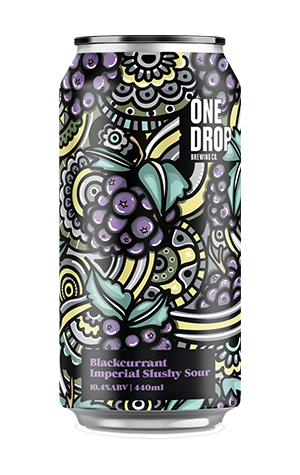 One Drop are regularly pushing the boundaries of what can be considered beer, and heading along to their Botany brewery will only further muddy the waters. Case in point: a concoction served up at the recent Crafty Cabal event there involved two different fruited sour beers that had been run through a slushie machine piled high with a soft serve made from their double vanilla custard pancake imperial thickshake IPA. Just that beer alone throws into disarray centuries of zythological theory, but mix it with soft serve and serve it with a spoon atop of beer slushie and it may as well be a declaration of war.

This One Drop release isn’t quite at the point of inducing a violent conflict, but it has all the makings of making some people very red and angry. Not least because if you’re unfortunate enough to spill a single drop of this blackcurrant slushie sour on anything, its particular shade of deep red/pink will make a mockery of those hubristic fools down at the Napisan factory. Forget cleaning products, you’re going to need candles and a pentagram scratched into the floor to get that stain out.

Firstly, for the proper blackcurrant slushie experience, One Drop recommend you partially freeze your can before opening. Upon opening your ice cold tin of fruited frivolity, you’re greeted with an icy thick sludge not dissimilar to deoxygenated blood. Suitably, the aroma is of blackcurrant, red berries and lemon/lime cordial. The citrus acidity is like a punch in the face but it works really well with the super cold serving. The addition of lemon and lime juice adds the extra complexity needed to cut through the abundant ripe blackberry character. Amazingly, this beer is just shy of ten and a half percent alcohol, 3.6 standard drinks to a can, and the alcohol heat is virtually undetectable.