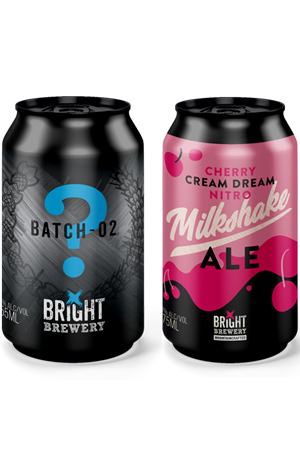 Think you know your beer? Then Bright want you to have a crack at guessing their Mystery Beer. It's the second time their head brewer Reid Stratton has concocted a beer without telling anyone what the style is, and if you can guess it right you'll win a year of beer – a case a month for 12 months. First time around he brewed a Stickebier, a stronger version of the German altbier style, and beer two comes with a secret ingredient for you to guess at too. You can check out a promo video featuring Reid getting a battering here.

The other new can leaving the High Country is less of a mystery; well, it's the sort that would be a mystery to anyone who'd stopped drinking beer around 2010, but that's besides the point. Cherry Cream Dream Nitro Milkshake Ale tells its story in its title: a nitro-boosted dessert beer brewed with vanilla, black cherries and lactose. It looks like an amber/brown ale, in which soft, crushed biscuit cake base swirls with a nougat softness and sour cherry chews.

Or imagine putting a cherry jelly topped cheesecake through a blender and you're on the right track.