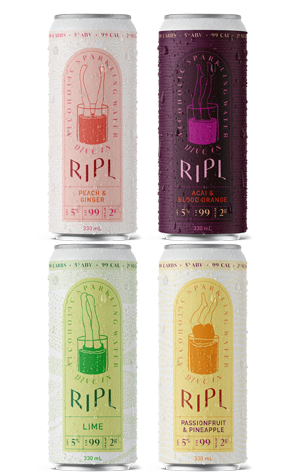 When they saw the rise of hard seltzers in 2020, the 7th Day crew decided to join the action and come up with their own offering under a beachy lifestyle label called RIPL.

And as they’ve always seen themselves as owing something to our planet and the people on it, they continued that with RIPL: 10c from every can is donated to Waves For Water, an international charity that helps provide clean drinking water to countries in the developing world.

The flavours are inspired by parts of the world where Waves For Water works - Peach & Ginger, from South East Asia; Pineapple & Passionfruit, from the Pacific islands; Lime, from the Caribbean; and Açaí & Blood Orange, from South America.

Each of them has a heady aroma to transport you for a moment to another spot on the globe, before arriving at a light, rejuvenating flavour (and they contain just 99 calories per 330ml can, if that matters to you).

Note: there may be other hard seltzers released by 7th Day, but we won't be writing about them individually outside this post. We're happy to let readers know which breweries are playing in this space, but we're a beer website and need to focus our attention on the diverse array of beers being released.