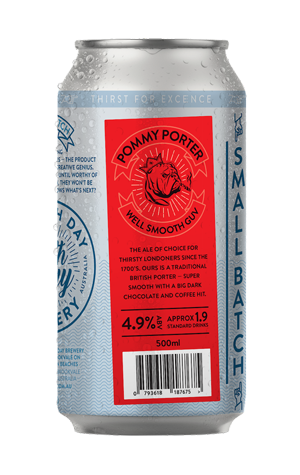 Head brewer Mike Beresford-Jones is a Pom, so it’s only fitting that a traditional British porter would periodically make its way into tank and tap and tinnie.

The Pommy Porter brings coffee and roastiness to the party, with a thin bitterness and light smokiness settling on the tongue towards the end of the drink.

Since Australia has been his home for a number of years now, Mike has also made a variation on this, the Aussie Porter, which included twelve 1kg tins of Milo in a 1,000 litre batch of beer. (For scale, 12kg is roughly half the amount of Milo an average teenage boy scoops into a glass of milk.)