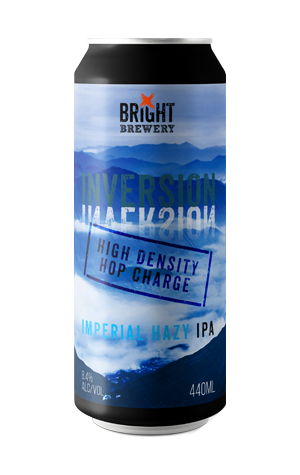 Who needs abbreviations like DDH and NEIPA when tallboy tinnies give you enough room to plaster long-form on them? Certainly, the team at Bright Brewery clearly felt no need to keep things tight with their imperial version of Inversion, which is described as a "High Density Hop Charge Imperial Hazy IPA".

If we break that down, there's certainly a high density to the hazy appearance, with this 8.5 percent ABV drop displaying the requisite deeply opaque, orange-yellow haziness required for Instagram photos. There's also a high density when it comes to the aroma and flavour, suggesting the hop charge in combination with the rest of its parts was a sizeable one. The experience flits from a tropical fruit-laced fluffy sponge cake topped with a drizzle of syrup to something more texturally prickly and grassily, pithily bitter.

Looking back at what we had to say about its forebear, the Inversion NEIPA, it does appear to have taken that beer's characteristics – fruity, sweet, bitter, cloudy – and souped them all up. It's a policy that makes for a pretty boisterous rather than balanced beer, but evidence on social media suggests that's what many drinkers are after in their imperial NEIPAs, so job done.