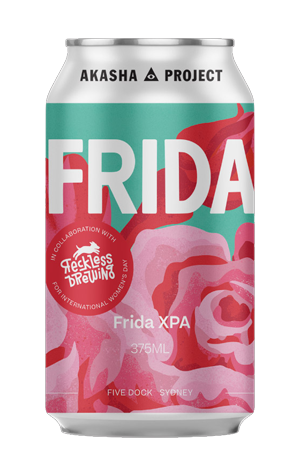 Brewed to coincide with International Women's Day 2021, Frida is a collaboration with fellow Sydneysiders, Reckless Brewing. Named after the early 20th century Mexican artist, icon and all-round legendary figure, Frida Kahlo, this is a bright and tropical XPA that somewhat belies the deeply serious and, frankly, disgraceful level of gender inequality that still exists in this country and the world at large.

Really, it’s a testament to Grace, Alice, Katy, Alex, Nichole and all the other women associated with these two brewing companies that they consistently manage to put out excellent beer despite so much of the deck still being stacked against them. On average, men in Australia make 25 grand more than women every single year. Women do twice as much unpaid domestic work as men and retire with half as much in superannuation. One in four women have been sexually harassed in a workplace and 90 percent of the perpetrators of this harassment are men. A mere 18 percent of CEOs and 32 percent of parliamentarians are women despite making up more than half of the population. One does not need to be a woman nor a father of girls to know this situation is untenable and must change.

Back to the beer, and you find Frida pours super pale and crisp with the slightest of haze. The primary first impression is of tropical mango and pineapple that stretches into lemon/lime cordial as it sits. In the mouth there’s the slightest hint of the notorious Sabro coconut playing against clean pale malt and restrained bitterness.

All proceeds from the sale of Frida are going straight to the Leichhardt Women’s Community Health Centre and, at 4.2 percent ABV, there is absolutely no reason not to pick up a few tins.