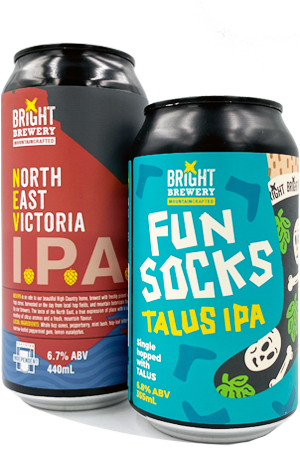 When is an IPA not an IPA? These days, in pretty much any way you can think of. Maybe the better question is: "What even is an IPA these days?" In the case of Bright's North East Victoria IPA – a celebration of their home region – it's a combination of fresh hop IPA featuring hop cones plucked on brew day and a bunch of botanicals foraged by the brewers: pepperberry, mint bush, hop-leaf bitter pea, narrow-leafed peppermint gum, and lemon eucalyptus.

Were you unaware of the farmer's market stall's worth of added ingredients, you might just assume the use of whole, wet hops had added some stemmy qualities to the tangerine-led and faintly bubblegumy hop vibe. Once you realise they're there, you realise the source of such elements could be more than just hops, as a subtle, spruce-tinged herbal lift and a building, slightly oily bitterness contribute to a livelier palate than many beers of such hazy appearance. Give it time in the glass and more of the adjuncts come to the fore, with a minty, dare I say toothpaste-reminiscent aroma, appearing late on.

Talus IPA is a rather more straightforward IPA, even if the hop itself – a descendant of the love it / hate it Sabro – is far from straightforward. It takes an otherwise straight down the line West Coast IPA – golden, pretty clear, layered, upfront bitterness, a little caramel malt in support – somewhat offline: cedar leads the aroma, with spiced oranges, a little vanilla and maybe even some blackberries teased from this multifaceted variant.