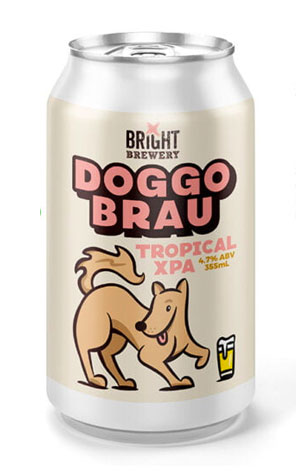 It goes without saying that dogs are loveable creatures (and Border Collies the most loveable of all – it's a fact; don't @ me). The fact Donald Trump is the only US president in aeons not to have one says it all. Within the craft beer world, the fondness for furry, four-legged friends seems to be even stronger than in wider society too, with all manner of dog-focused events and promotions (not to mention brewing companies with dogs in the names and branding).

Joining that long line of canine-friendly campaigning crafties is the team at Bright, who've launched Doggobrau in partnership with RSPCA Victoria. It means ten percent of sales from every beer sold will go directly to the charity to help rescue, rehabilitate and rehome animals in need.

Given the key aim of the beer is to raise awareness and money for a good cause, it's one of the more straightforward beers to leave the High Country brewery in some time: a tropical XPA in which they've kept things simple. There's soft tropical vibes throughout in a beer that never veers from approachable, wrapped up with a drying clip of bitterness. Woof.

For more on the campaign, head here