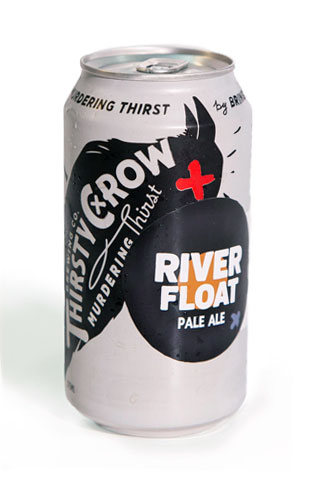 It might have taken them nine years to finally brew a pale ale, but when the Thirsty Crow brewers did get around to it they nailed the brief. They didn't attempt to reinvent the wheel with River Float, instead taking inspiration from the classic American pales that did more to change the face of beer today than any other.

Malts from local producer Voyager are matched with Cascade, Citra and Simcoe hops from the US – and when I say "matched", I mean it. The caramel and biscuit-giving malts that lend River Float its copper colour play just as prominent a role in the beer's character as the citrusy, piney hops, while there's a very present, drying, earthy bitterness like those American game-changers, plus deep, piney flavours that linger.

On an extended camping trip over Easter 2021, the fridges and eskies were filled with all manner of beers covering myriad styles, but when it came down to the beer we'd fight over at the end of a day on the Glenelg, it was River Float. Crack one, pop on this Blake Scott track that captures the same spirit in which the beer was created, and enjoy.