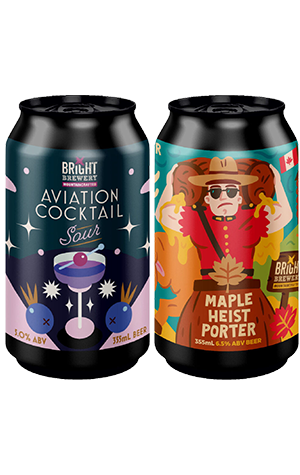 Towards the start of 2021, Bright Brewery looked to deliver a cocktail experience in beer form with Penicillin. Following on its tail is this GABS beer, which saw the High Country brewery partnering up with the town’s Reed & Co Distillery to create Aviation Cocktail Sour, which has been given a wider release following the festival's conclusion. The botanicals used in the beer were selected by Reed’s head distiller Hamish Nugent to reflect the namesake cocktail made of gin, maraschino liqueur, creme de violette and lemon juice. Regardless of the many beer releases you see, dark purple remains an odd one, with this beer getting its colour from blue-pea flowers to really resemble a cocktail in the glass. It also picks up a lot of bittersweet cherry notes, which to my mind, are quite close to children’s cough syrup, though soon fades as the beer’s tart edge builds over time.

Also out is what’s quite likely Bright’s most colourful detailed can to date, Maple Heist Porter, which two lucky members of our beer lovers bonus scheme, The Crafty Cabal, will be soon receiving two cases. The name refers to the very real story of some 3,000 tonnes of maple syrup, valued at 18.7 million Canadian dollars being stolen from a storage facility in Quebec. That value is why you should always get the real stuff over “maple-flavoured syrup” but having said that, I have a confession to make. Sadly I'm not talented enough to tell the difference between real maple syrup and the maple-flavoured stuff, but I can say it's in there in substantial order. You can taste it immediately while it’s also joined by a rummy flavour and additional burnt sugar, chocolate and toasted notes.