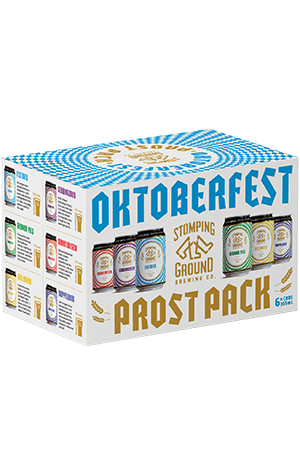 Stomping Ground’s brewpubs can at times feel like being in a German beer hall but with each of those venues caught up in a lockdown, the Melbourne operation wanted to find another way to get a slice of Bavaria to people. They’ve done it with the Prost Pack; six different traditional German-style beers, inside one cheerful box and each can dressed in some Oktoberfest-inspired patterns and colours

To begin, let's start with what’s not the lightest of the half dozen but is the most Oktoberfestive. Festbier is the brewery's Märzen-style lager that pours a golden orange colour and has a mix of light honey and biscuit notes and though it’s largely easy going and clean, there’s quite a substantial bitterness at play too.

That’s joined by German Pils; a 5.2 percent ABV bright and sparkling lager that presents with a hint of honeydew and watermelon rind along with more classic pilsner hop flavours of a light floral and earthy spice. A (fraction) heavier is Kellerbier, the kind of lager that dates back to the Middle Ages and is hazier and a richer colour when compared to Pils. With a touch of sweet bready or biscuity flavour, it’s also a more richly flavoured beer though with a substantial bitterness and spiced hop notes that sweetness is once again balanced out to allow for the cellar beer to be enjoyed by pint, if not a stein.

Stepping things up a notch (at least in terms of colour) is Dunkelweizen; a dark wheat beer with rich and toasted malt notes and strong aromas and flavours of clove that eases into banana esters. The darkest of them all is Schwarzbier, or a black lager with roasted and toasted notes, a touch of coffee and a slight dark chocolate flavour that are all whisked away in the beer’s crisp finish. Finally, we arrive at number six and what's the biggest of them, with Doppelbock coming in at 7.8 percent ABV, which presents heavily with burnt caramel and toffee and provides a fruited finish of dried apricot and date.