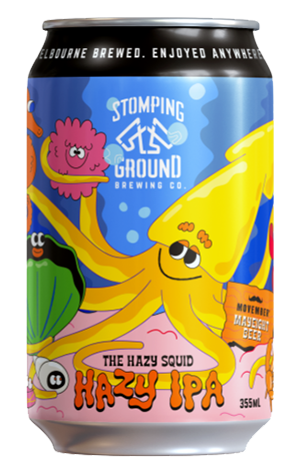 Since 2017, Stomping Ground have been partnering with Movember to raise money for health issues impacting men and in 2020, the Melbourne brewery added a new competition to their fundraising efforts. They asked Gipps St Pale Ale drinkers to show off their Mo’ for the chance to brew, name and launch their own beer with a mate in time for Movember’s annual celebration of mateship, MayEight. As part of the celebration, Stomping Ground is donating $5,000 to the initiative, bringing the brewery's grand total raised for Movember Australia to $240,000.

That winner was Michael, who is better known in beer circle by his social media alias The Hazy Squid, and Michael brought his mate Matt along to the brew day. Given his social media handle, we shouldn't be surprised that Michael and Matt decided to brew a hazy IPA and deck the tin with aquatic creatures. The beer pours with the same bright yellow as the eponymous creature on the can and is filled with notes of ripe mango, mandarin and a little coconut and while there’s a slight bitterness and a bit of pine too, mostly The Hazy Squid is a soft and swirling tropical party under the sea.