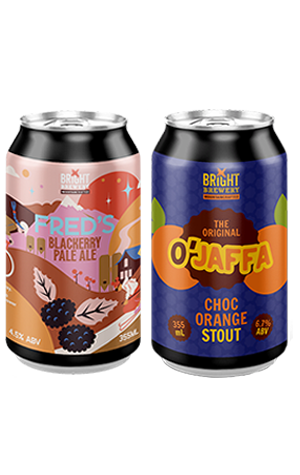 Bright Brewery have celebrated International Women’s Day 2022, with a particularly touching tribute beer. Fred’s Blackberry Pale Ale was named in honour of the High Country brewery’s late cofounder Fiona ‘Fred’ Reddaway with members of Fiona’s family taking part in the brewday at Fred's Shed along with women who work different roles at Bright. You can see how the brewing unfolded by watching this video and steering the beer development and brewing was trainee brewer Madi Cooper, while Melbourne artist Lynn Bremner designed the can and part of the proceeds from each can sold are going to Pink Boots Society Australia. It's Madi's first beer that she's overseen from recipe to release and the deep-auburn beer feels like a deeply fitting autumnal release. Not only does its pink and red hues bring to mind the leaves that scatter around Bright later in the season but the sessionable beer seems fitting for both warm days and cooler nights, with the classic pale ale providing a slight biscuity chewiness while the fresh flavours of blackberry and the softest tang ensure the beer's incredibly refreshing.

Looking towards some much colder weather is O’Jaffa, a chocolate orange stout from Bright inspired by the classic confectionary combination. There’s a bit of a trifecta at play here with a swirl of dark chocolate, roasted elements and orange aromas all hit all at once and while, like a true dessert, the orange here is sweeter than the actual fruit, those richer tones are kept in check by a roasted, bitter finish.