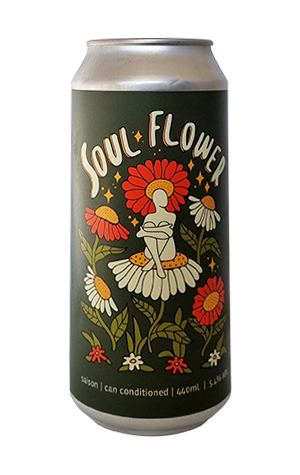 Since launching in 2020, Sobremesa Fermentary & Blendery have released multiple beers that really feel destined to be shared outside but Soulflower puts the park in park beer. It was the brewery's first release in cans and after an initial release in March 2022, it became the brewery's first core range release later on in that year. So it's obviously one that stood out to beer maker and drinker alike and given its balance of complexity and drinkability, it's not hard to see why. Hopped with Saaz, Styrian Golding and Tettnang, the beer was fermented in stainless with Sobremesa’s house saison strain before being can conditioned for six weeks.

Crack open the fermentary’s core can and you’ll find an aromatic mix of fresh flowers, lemon peel, cloves and pear. Dive in deeper and more underripe nectarine and further citrus elements come into play, while Soulflower's dryness makes the beer particularly quaffable. Casey and Hannah from Sobremesa say it reminds them of listening to Khruangbin with mates in a new Bunnings camping chair and honestly, that sounds about as good as life gets.