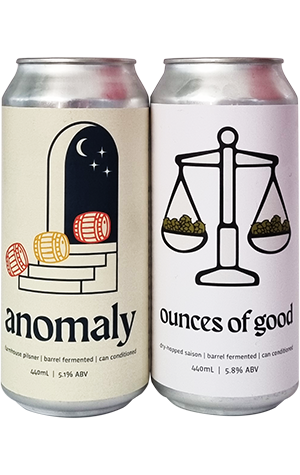 The Sobremesa Fermentary & Blendary team and the folk at Mr West might share a deep affinity for farmhouse and funky beers but both love a good pilsner too. Anomaly is a collaboration that borrows from those two corners, with the farmhouse pilsner funky but crisp and featuring Tettnang, Saaz and Hallertau Mittelfrüh hops. The beer initially spent eight weeks fermenting in a puncheon barrel with a blend of lager yeasts, before spending six weeks conditioning in cans at Sobremesa’s home only to spend a further eight in Mr West’s cool room. Although no Brett was added, those residual microbes from that puncheon have left a mark with an underlying funk joining flavours of lemon rind, thyme and sage. There's also a soft and creaminess to the beer's while cereal notes bring to mind unfiltered lagers and an undeniably clean finish make Anomaly an incredibly refreshing drop.

Ounces of Good is another beer that feels ready to face spring, with the saison dry-hopped with Germany’s Perle and Saphir hops at a rate of hopping Sobremesa have never before used. A blend of saison yeast and Brettanomyces were used too and here, that Brett seems to add in a lot of pineapple juice, while there are further notes of lemon sherbet and pithy grapefruit before the German hops bring spice and cloves to make that scale on the tin tilt in a savoury direction.