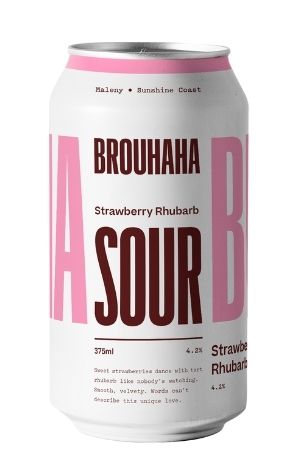 But celebrity can bring difficulties. In the case of Strawberry Rhubarb Sour – nicknamed Strawbarb by the Brouhaha crew – the main difficulty was that the brewery couldn’t make enough of the stuff. Not only did it reach the point where it outsold the next most popular beer in Brouhaha’s lineup four to one, but its 48-hour souring process created a regular bottleneck in the brewhouse. The team were always struggling to keep up with demand for Strawbarb.

When Brouhaha built a large production brewery in 2021, they did so with this beer in mind. Not only did their brewing capacity increase several times over, but they even custom designed their kit to include a second kettle specifically to handle the volume of Strawbarb they’d be making. The first brew to come through the new brewery was a batch of Strawbarb, and straight away it snagged the Champion Mixed Culture trophy at the 2022 Royal Queensland Beer Awards (and later in the same year took out Champion Fruit & Funk beer at the Indies). Not too shabby.

But you don’t need to be a beer judge to understand why it’s so popular. It’s sweet and sour. It’s smooth and layered. It’s a little bit pink and a lot refreshing.