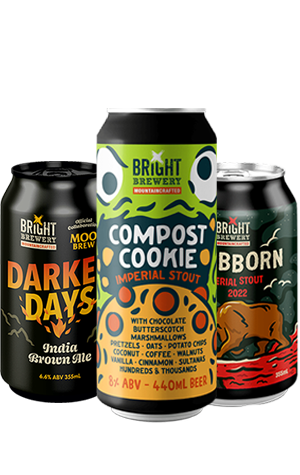 Bright Brewery aren’t ones to let the cold weather pass them by, with the High Country brewery greeting their surrounding snow-capped mountains with multiple beers. Starting with their Darker Days India Brown Ale, the collaboration was made with Tassie’s Moo and launched at Bright’s wintery celebration of the same name. The beer combines three New Zealand hops in Nelson Sauvin, Motueka, Kohatu with Australia's Enigma and a variety of specialty malts for a beer that brings chewy notes of fig, caramel and toast with dank pine, citrus and a distinct touch of gooseberry.

Compost Cookie meanwhile, was brewed for GABS and inspired by the treats of head brewer Reid Stratton’s childhood. In a country where cereals can more closely resemble desserts, the cookie feels like a logical one to make with it including just about everything in the cupboard. It means that in this beer, chocolate, butterscotch, marshmallow, pretzels, potato chips, oats, coconut, coffee, walnuts, vanilla, cinnamon, sultanas and Hundreds and Thousands are all part of the recipe that better resembles a family home's shopping list over a brewery's stock order form. Unsurprisingly, it’s a particularly rich and sweet stout with chocolate, coconut, roasted coffee beers and vanilla being among the most prominent flavours but where a touch of salt and a variety of other flavours are lurking deep within.

Finally, Stubborn is the kind of beer that likely needs no introduction to Bright fans, with the imperial stout long being a winter staple from the brewery. 2022’s vintage might be sold out from the brewery’s webstore at the time of writing but you’ll still find it in good booze retailers and if you grab one, it's a release that leans more towards the roasted side of imperial stout territory, with coffee, nutty and burnt sugar flavours produced first before being joined by a boozey warmth and dark chocolate that's been dipped in molasses.

Speaking of returning beers, Bright's Black Diamond as returned for another year, with details of that Black IPA available here.