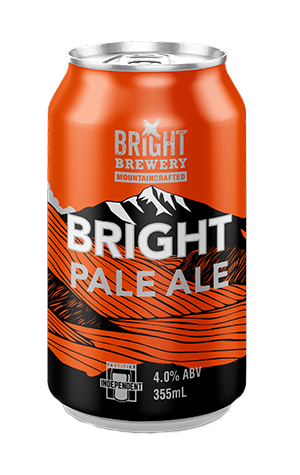 Bright’s pale ale is dead, long live Bright Pale Ale. In 2022, the High Country brewery made the decision to saw farewell to Blowhard Pale Ale, which had been in their core range for some 16 years, and replace it with something a little more modern. That more modern was the simply titled “Pale Ale” which had been finding fans at their taproom since 2021 thanks to its new world hoppy combination of El Dorado, Galaxy, Vic Secret and Trident in the shape of the hop-derived product, Salvo.

Compared with the classic American pale Blowhard, this pale is a bit more of a modern affair thanks to its low bitterness, lean malt base and punchy aromatics. Primarily, those come in the shape of citrusy grapefruit and mandarin, with a light tropical medley that moves between pineapple, pawpaw and passionfruit.

To celebrate the beer’s arrival, the brewery have launched the Golden Lid competition featuring 50 beers with golden lids. Anyone who finds one can go in the draw to win a major prize worth more than $1,000.

Members of our club for beer lovers, The Crafty Cabal, can go into the running to win a case of the beer. Log in or sign up for a chance to win.