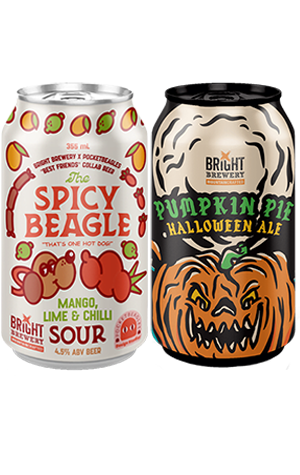 We’re in close proximity to the spookiest time of the year and I’m not just talking about Halloween. On October 15, the designer behind Pocketbeagles, Clint Weaver, celebrated his booze (and non-booze) clients at CoConspirator’s home in Brunswick with a Pocket Party. OK, so maybe it wasn’t so frightful† and more delicious, with canned cocktails served, delicious snacks enjoyed and four different beers made just for the event. Among them was The Spicy Beagle, a mango, lime and chilli sour brewed with Bright Brewery with an aim to harmoniously bring together spice, sweet and sour. Whether enjoyed at a Pocket Party or a street food festival, Spicy Beagle is the kind of beer that would pair seamlessly with myriad small plates. There’s citrus that comes in the shape of zesty lime, mango that’s akin to biting into a tart corner of the fruit and a soft but building bit of heat that, alongside a continued sourness on the palate, it's as refreshing as any ginger beer you could find.

OK, so truly spooky is Bright’s Pumpkin Pie Halloween Ale, which is a returning beer in 2022 and inspired by one of those famed American dishes best known for cooling on windowsills. This one was brewed with 100 kilos of roasted pumpkin and baking spices and pours golden orange while providing an aromatic mix of bready sweetness, cinnamon, clove, nutmeg and ginger.

†Having said that, speaking as someone who has known Clint for many years, his fresh, beardless appearance is a little shocking.